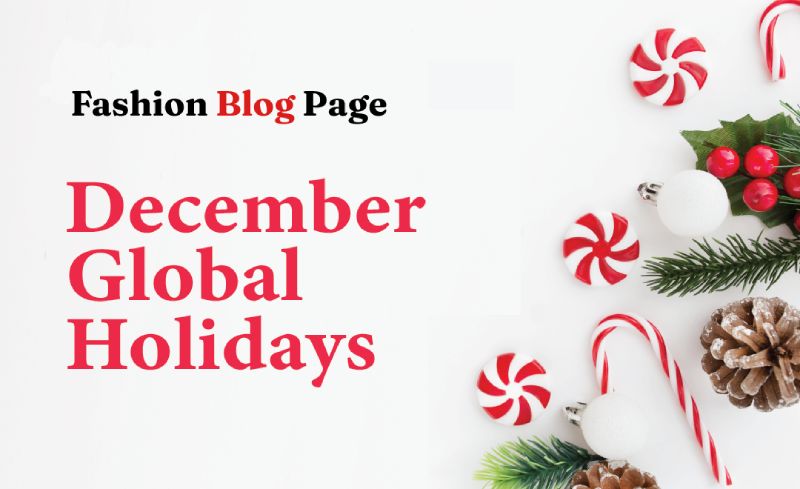 December Global Holidays: December is synonymous with holidays, cookies, snow, and happy times. For some, it’s the best month to spend time with friends and family, and for some, it’s a time of optimism, hope, and lots of celebration. But whatever the reason, there is no doubt that the December holidays bring joy, happiness, and lots of delicious food worldwide. Even studies show that December is the most popular month to travel, with more people booking trips during the joyful times of global December celebrations.

December is also associated with happiness due to the feeling everyone gets during this time. People are friendlier, there’s more laughter in the air, and you can see others around you exchanging gifts. This atmosphere automatically makes people happier because it effortlessly stimulates them to feel good about themselves and others.

So what are you waiting for? Go out and enjoy the different December holidays! Whether you’re somewhere on the beach sunbathing or spending time with your family at home, remember that December is the time to party and be happy! Here we share a list of holidays and celebrations worldwide in December 2022 that seem to fill the air with happy times.

Celebrated for eight days, Hanukkah is one of the world’s most important December holidays when Jews gather with family and friends. The festival started in Israel, and the story goes that when the Jews fought back against the Greeks, they found a small jar of oil that was supposed to last for a day. But miraculously, it took eight days instead! Hanukkah is therefore considered the anniversary of this miracle. Unique and particular foods are eaten during Hanukkah, such as latkes (potato pancakes) and jelly donuts. Today, Hanukkah is celebrated in about 21 countries worldwide, and people are learning more about Jewish heritage.

The reason for the celebration – The triumph of the Jews aka Maccabees over the Syrian Greeks in retaking the Temple in Jerusalem.

Krampusnacht is a celebration of the arrival of Krampus, a demonic creature who punishes naughty children. The celebration’s origins are unclear, but it intends to scare children into behaving during the Christmas season. Krampus Night is celebrated in parts of Europe in early December, and celebrations may vary from city to city. In some towns, a group of young men may dress up as scary creatures and go door to door to scare children. It has become one of the national holidays in December worldwide when people celebrate or hold parades and enjoy delicious snacks, drinks, and music.

Place of celebration – Austria, Germany, and other Alpine countries

The reason of the Celebration – To discipline naughty and disobedient children.

Bodhi Day celebrates on December 8 to commemorate the enlightenment of Siddhartha Gautama, who became Shakyamuni Buddha after his first taste of freedom. The festival has become popular as an alternative New Year celebration in some countries, particularly among Buddhists. Bodhi Day, the most important holiday for Buddhists, observes by religious communities worldwide. It honors the realization of Buddha’s highest vision in spiritual truth and his death. This beautiful day of wisdom is Sambuddhatva Jayanthi, which means Sambuddha’s birthday or awakening. The enlightenment of the Buddha is considered an important event in human history.

The Reason for the Celebration – To celebrate the day of spiritual enlightenment of Siddharth Gautam and his achievements.

4. Feast of the Immaculate  (December 8)

The Feast of the Immaculate Conception is when we pay homage to the Blessed Virgin Mary. Catholics believe that God gave us Mary as our mother, and they celebrate her birthday on December 8 every year. Mary was believed to have been chosen by God to be the mother of Jesus because she was pure, holy, and sinless. For this reason, Catholics celebrate the Feast of the Immaculate Conception by going to church on this day to pray. You can also say a special prayer called a “novena,” which recites nine times in a row to thank her or ask her for help.

Another major global holiday in December is saint Lucia Day, it celebrates to honor the appearance of a shining star in the sky that led the three kings to Bethlehem to visit the newborn baby Jesus. A common way to celebrate the day is to give children gift baskets filled with traditional St. Lucian items such as candles, biscuits, and fruit. In addition, many people celebrate by singing Christmas carols and exchanging gifts. Another common tradition associated with St. Lucia is wearing a wreath of candles on one’s head. It was also believe that St. Lucia brought food and relief to mistreated Christians in times of oppression.

As part of the Christmas celebrations, Las Posadas pays homage to the painful journey of the Blessed Virgin Mary and Joseph. It was supposes that Mary and Joseph were looking for a refuge to bring Jesus to life, but no one let them in. The refuge was found after a long struggle. Las Posadas celebrates to appreciate this moment of hospitality. This holiday is usually marks by friends and families going happily from house to house singing traditional songs while taking shelter. The people living in the homes usually offer them food and drink.

Place of celebration – Mexico and parts of the United States

Reason to celebrate – To mark the journey of Mary and Joseph as they sought a haven.

The winter solstice is one of the coldest days of the global December holiday, marking the northern hemisphere’s shortest day and longest night of the year. It is called the winter solstice because it commemorates when the days start getting longer again. It usually takes place around December 21st every year. Also called Christmas or Midwinter celebrations, some common fun practices are everywhere. Such as singing from house to house after dark, putting candles in paper bags (to prevent fires), hanging evergreen branches in one’s home, setting up a decorated evergreen tree, and offering gifts. Gifts to family or friends. (December Global Holidays)

It is the most important part of the global December celebrations. Christmas celebrates for many different reasons. The most common reason is the birth of Jesus Christ, who Christians consider the saint and son of God. Another reason to celebrate this special day is getting together and spending time with friends and family. It’s the happiest time of the year when people gather to celebrate, eat good food, and exchange gifts. Whatever your reason for celebrating Christmas, it’s the perfect time to take a break from everyday life and spend some quality time with the people you love.

Stephen’s day celebrates annually on December 26 and commemorates stones that killed Saint Stephen after preaching to his people for 40 days. According to legend, Stephen died with a stone previously given to him by the Lord Jesus, who had promised that none of his disciples would ever die from it. He was a Roman Catholic priest and was later ordaines around 1000 AD on the same Day in Esztergom (Hungary) as the first Christian king of Hungary. One of the world’s most important December holidays in the UK, the day is celebrates with traditional dishes such as stuffed cabbage and buckwheat dumplings known as Halushky.

Place of celebration – In more than 25 countries, including Austria, the Czech Republic, and Denmark

The reason for the celebration is to keep Saint Stephen’s memory alive and admire his journey as the first Christian martyr.

Among the global December festivities that bring family, culture, and community together, Kwanzaa is celebrates for seven days and is dedicates to the seven principles. The principles include unity, collective responsibility, self-determination, creativity, determination, cooperative economy, and faith. These are also known as Nguzo Saba or “the seven principles that guide the celebration of Kwanzaa”. Kwanzaa creator Maulana Karenga says, “Nguzo Saba are African proverbs that offer guiding principles for behavior similar to what we call ethics and morals. During this time, people usually come together to celebrate and eat, music and gifts to share, in addition to lighting candles at each holiday.

Place of celebration – Africa and parts of the United States

The reason to celebrate – Commemorating the heritage and culture of African Americans.

ALSO READ: What To Do When In Gold Coast